Gastronomy – curator about tools for eating

Chopsticks tempt to share the food, says Martin Kullik. And explains why you should simply try to eat Tiramisu with the hands. 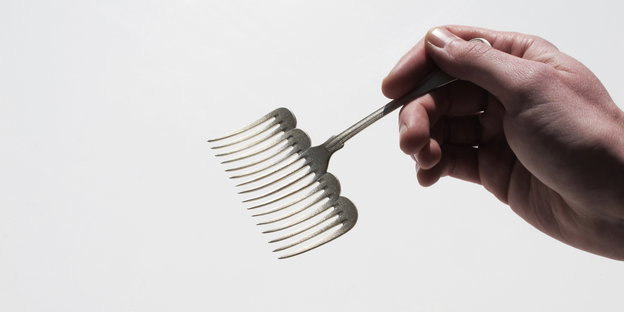 Simply re-think the fork: Maki Okamoto has done it.

Martik Kullik: Because the perception of the food changes a lot when it happens in a different setting. This is something we are dealing with since a few years and in 2009, we founded Steinbeisser as a project for experimental gastronomy. Because we see that many chefs, especially from the area of Fine Dining, spend a lot of thoughts on cutlery, dishes, glasses, and all the other stuff in their restaurants.

But the most important thing here is the right ambience.

Not only. Via the cutlery you can influence how the guest eats. Shall he eat slowly, only eat small bites? Does the taste make an even better impression when he uses a spoon? That is something that chefs nowadays think about, too.

The cutlery you are using,however,reminds more of a multi tool.

The cutlery pieces are created by Nils Hint, an iron smith in Estonia. There exist, as in many other countries of the former Soviet Union, still gigantic storing places with residual metals. Helicopter wings, pieces of old submarines, old machine guns or pistols up to cutlery and tools. Every year, Nils buys a few tons of this material and manufactures it to installations. And for us, he melded tools with cutlery. Now, you have a piece with which you can chose yourself, what you eat with, what you are used to, that means a spoon, a fork and a knife: Or do I want to eat with the pincer pliers, the screwdriver, or the hammer.

Do you have an example of how cutlery influences perception?

There is a very simple one. Many people can no longer imagine eating with their fingers. This holds at least for the Netherlands, where I live. But just try to use only your hands to eat a tiramisu. Probably, you will due to its consistence at first eat large pieces and in the end lick off your fingers. That is an entirely different experience from eating with the spoon. Here, you always have almost equal bites in your mouth.

I do not want to criticize this. Knife, fork and spoon have developed to habits. Traditions like these are important, but innovation should not be underestimated. The fascinating thing is: Because humans have such a long experience with it they developed very usable tools. They are balanced, they differ hardly in weight and length. A tablespoon weighs on average 25 grams, most of them between 15 and 30 grams. And nonetheless, designers engage themselves with cutlery: not only to fit it to the current fashion. It is also about functionality. For example, there is a cutlery from Italy that has a much more angular cutting edge. It is much more suited as a pushing-tool. And still it cuts equally well.

What about the spoon? Is there room for improvement?

The spoon is a universal key, it is the picture of the cupped hand. At our events, it always lies on the table. But once, a South Korean artist was at one of our events who tried to improve the spoon. The tool did not taper off as pointedly. She took the shell as an example. It was made of an elastic material. With it, you could pick up the food and take it to your mouth, similarly as you do it in India with the bread that you draw through cooked lentils. I tell you: With such a spoon, you can eat very quickly. Somehow, it is the perfect cutlery for fast food. So why should I not develop the cutlery depending on how the differentiation of out eating habits develops?

Then,there should also exist cutlery for somebody who wants to eat slowly.

Yes, spoons for example, that are almost one meter long or cutlery that is so heavy that you have to lay it aside for a while during the meal. That is something that we have had before. They are impractical, so you simply have to chew longer. Somehow, this would fit very well with the ayurvedic or macrobiotic kitchen that demands exactly this.

With such a long spoon I had tried to feed the person sitting on the other side of the table. Can cutlery have a social function?I’m just thinking about the difference between knife and fork and Asian chopsticks.

Absolutely. Chopsticks are much more about sharing. Knife and fork have a big similarity with the tools in a kitchen. Already a cutting tool at the table – that makes you immediately think of separation. However, the chef in the chopstick kitchen cannot delegate work to the guests. The tools are much more reduced, due to their length more appropriate to jointly take from the same plate. The plates on the other hand, that are placed in front of everybody, are much smaller as here…

…and you have no opportunity to signal: This is mine. Beyond the shape,what else determines our taste?

Colours play a very important role. Many people, who professionally savour ice cream, use golden spoons. Why? Because colour intensifies the perception of sweetness. It has also been discovered that blue intensifies the perception of saltiness. This is a discovery that you could use in hospitals or lunch rooms, everywhere, where you have to save salt for some reason. Apply it to the colour of the walls, the tables, maybe even also dishes and cutlery.